No bank is an island, fintegration is the way

Pre-digital business models and processes will be rendered obsolete. European banks are aware of this disruption and of the opportunities behind these changes. Many have decided they need to participate in this disruptive trend by actively supporting fintech companies - the list includes Santander, BNP Paribas, Commerzbank, UBS, BBVA, Barclays among others. They have launched incubation and acceleration initiatives and/or created investment vehicles to harness, foster and scale up innovation.

For example, after speaking at the Paris Fintech Forum, BNP Paribas Wealth Management co-CEO Sofia Merlo shared her point of view of the Fintech industry. Meanwhile, Banco Santander has invested in two artificial-intelligence companies, part of the financial industry's increased focus on technology smart enough to mimic human thinking. The bank's venture arm, Santander InnoVentures, bought stakes in Personetics Technologies, which provides automated customer service and Gridspace, whose software can learn and interpret language the way a person would.

Santander, like other global leading banks - see the pie chart below - set up its London-based InnoVentures group in 2014 to invest in young financial-technology companies that can improve its digital offerings. 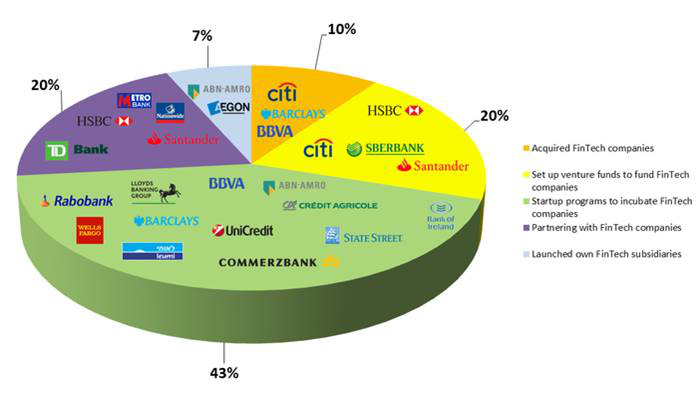 While banks have disadvantaes relative to start-ups, they also have advantages. Being regulated is a burden in many ways, but it creates consumer confidence. A long history brings legacy systems with it, but it also builds trusted brands (albeit tested by the global financial crisis) and provides rich historic data, not to mention a banking license and a sizable head start in compliance initiatives. And, of course, banks understand banking; especially the risks involved, which new entrants often do not. Collaboration is the key: the strenghts and weaknesses of both banks and fintech startups mean that both will often do better by cooperating rather than by competing.

New digital businesses must either grow quickly or die. Banks can offer fintechs immediate scale and critical mass through access to demand. While some fintechs are today on the race to build standalone "Unicorns" ( a company with a $1 billion valutaion), we believe fintech 2.0 represents a far broader opportunity to re-engineer the infrastructure and processes of the global financial services industry, in which teh top 300 banks command a reveneu pool worth $3.8 trillion.

Fintegrations is the answer: no man is an island - John Donne dixit.

Banks and fintech startups have more business interests in common than issues that divide them, according to a report from The Economist Intelligence Unit (EIU, 2015).

The document, entitled "The Distruption of Banking", is based on surveys of more than 100 senior bankers and 100 fintech executives and seeks to determine their respective views on the impact of financial technologies. It highlights the strenghts and weaknesses of both banks and these new players and the likely outcome of the phenomena for the retail banking industry over the next five years.

Finding suggest that 33% of bankers predict the upcoming retail banking landscape as a mix - bank and fintech - environment, each dominating sectors, while startup executives majorly believe that banks will continue to dominate (46%).

The danger for banks is that innovative business models take a bite out of every part of their product portfolios. The report suggests that their smartest option is to embrace disruption and team up with fintech startups to create new product innovations and better experience for clients. For fintech as well, collaborating with banks will be a critical step as they face important challenges. Scaling is one of them, as many of their business models require these startups to ramp up to millions of customers or transactions to make the return on invesment work.

Another challenge is time, considering that many of these startups work under a venture capital model that funds them for just a few years.

Finally, if success does emerge, a difficult task will be to move from startup to being a real financial services firm, which will require taking on the regulators, becoming proficient in the art of risk management, ensuring data security and building the technology to support these capabilities.

Interestingly, when comparing the banks' and fintech's strenghs and weaknesses to each other, the EIU found that there is a remarkable match between the strenghts of banks and the weaknesses of fintechs and coversely. This aspect further stresses that collaboration is the logical next step.

The key to success for these startups will be "partnering well", in a Banks-Fintech Symbiosis - the EIU said - as only a lucky few of them will be able to marry their models to existing institutions with trusted brands, deep pockets, industry expertise and millions of customers will be the ones that pull ahead of their peers to achieve rapid scale. "The logicla partners for the winners in Fintech will be the banks" the report claims.

As noted by Andres Wolberg-Stok, Global Head of Emerging Platforms and Services at Citibank:"The holy grail for banks is to become the best at fintegration". However, the main challenge of "fintegration" is to preserve "the acquired company's agility and innovation, while marrying it to the controls and assets of the bank".

Finally, the EIU projects that the dominant trend in retail banking over the next five years will be "banks' co-option of fintech models".

"Banks have proven their adaptability before; for example, when they digitised themselves and went online in the 1980s and 1990s. We expect to see many of the same banking names in 5-10 years, but the way we receive banking services will have shifted. As is the case in so many disruptive events, the winner will be the consumer, who will receive lower prices, more innovative products and better service in a transformed banking world".

Only by collaborating and going hand in hand will the opportunity of Fintech 2.0 be realised.