Bursting the Bubble: 3 Reasons why 2021 Crypto is Different

The recent growth has pushed many to compare it with the previous bull run of 2017. However, crypto has evolved significantly since then.

The overall cryptocurrency market continues to reach new highs. In just 3 months the market went from 1 trillion in total market cap, to double that (Bloomberg).

Many are comparing the 2021 frenzy with the 2017 bull run, which then left room to a 3-year-long bear market. However, since then there have been several developments that contributed to make the whole crypto sector as a whole much stronger and legitimized.

This articles highlights the main factors that make crypto in 2021 different than in 2017 by focusing on:

The cryptocurrency sector in general is not only experiencing a steady price growth, but in most cases, similar growth in the network usage and utility of the tokens. By using IntoTheBlock on-chain analytics and Bitcoin as a use case, we can observe growth in the amount of daily active addresses on the network (image below). With the exception of a spike in activity in January 2018, the end of the previous bull market, the Bitcoin network has since experienced significant growth both in terms of New Addresses and Active Addresses. 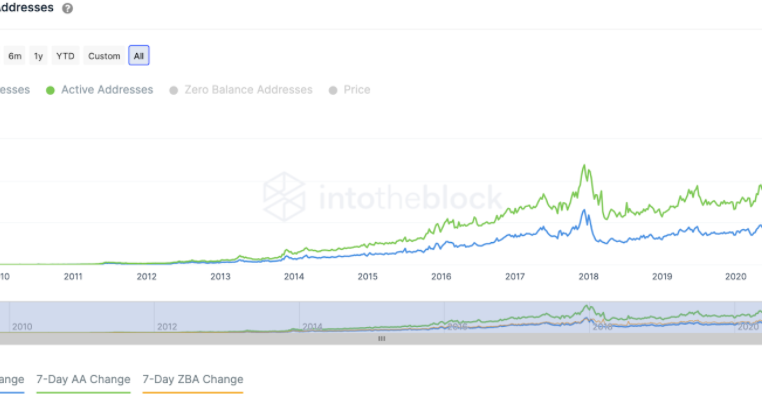 In April, 12 2018 there were 300k New Bitcoin Addresses and 625k Active addresses. On the same day in 2021, there are 448k New Bitcoin Addresses and 1.06m Active addresses (a 40% increase). This means that the Bitcoin network is getting increasingly used. Another trend pointing to Bitcoin network growth can be observed with the increase in long-term holders. 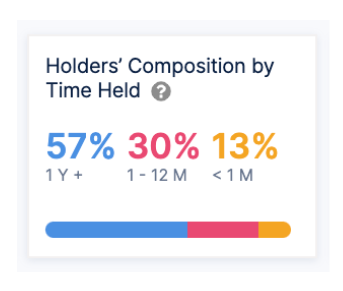 This is a much higher percentage, compared to 2017. As it can be observed below, the orange-red area, representing short-term trading spiked in 2018, at the end of the bull market. Nowadays instead, the green-blue area (representing long-term holding) is prominent, even though the price of Bitcoin keeps growing. Less users are actively trading in the short-term, while more are holding. 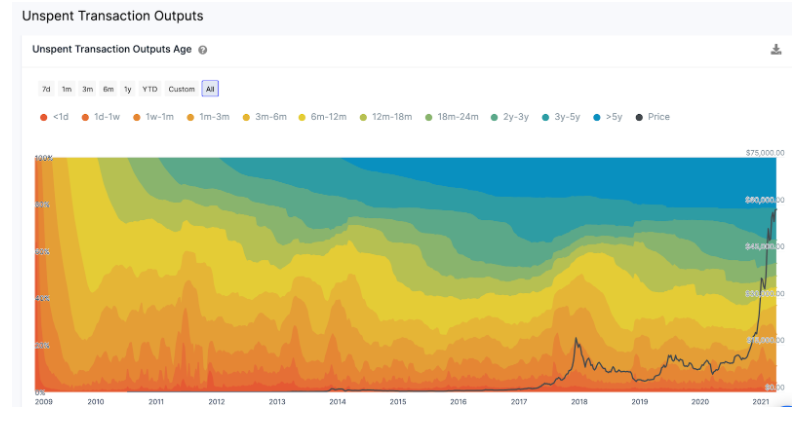 Existing use cases and applications of Blockchain technology

In 2017 most projects were in the early stages and had promising value propositions, claiming they would revolutionize their sectors. Ever since then, some failed, while others managed to build what promised. Fast forward to 2021 and we are finally able to see these projects in actions. This is especially true for Smart Contract Platforms, such as Ethereum, Binance Coin and Polkadot which are finally live and host thousands of Decentralised Applications (DApps). Only on the Ethereum blockchain the total value locked, that is the total amount of assets staked, peaked to $63 billion (Dappradar.com). Also, the total number of addresses with balance on Ethereum has tripled from 20m in 2019 to the current 60m. These blockchains are currently experiencing strong network effects and high levels of so-called social scalability (Nick Sazbo).

Just recently, Pancake Swap, a DApp based on the Binance Smart Chain that was launched just a couple months ago, has surpassed Coinbase in daily volume (CoinMarketCap). This is a major difference between the current state of the ecosystem and the past one in 2017. Nowadays people can actually use these applications and are getting real value from it. The world of decentralized finance (DeFi) allows unprecedented freedom: people can borrow, lend, access credit, get interests on their money, with ease and without third parties.

As such, the end users themselves will be able to discern between projects that provide real value and those who don’t. A future bull market will likely impact the sector as a whole, but will surely see the survival of projects who are widely adopted and used.

Arguably one of the strongest elements of legitimization for Bitcoin (and indirectly for cryptocurrencies in general) has been the wider institutional adoption experienced during the last couple of years. While Bitcoin was initially raising eyebrows in Wall Streets, now many are turning towards the unconventional asset to differentiate their portfolios. The 10-year-old track record of Bitcoin and a few others (mainly Ethereum, soon Polkadot, Link) is positive and points towards a strengthening proposition of these assets not only as a means of exchange, but also as a scarce store of value. According to Bitcoin Treasuries, more than 1.4 million Bitcoin is currently holded by public/private investors. Notably, the Grayscale fund and Microstrategy Inc. are among the biggest institutional holders, holding respectively over 140k and 90k Bitcoin, respectively.

New vehicles are allowing traditional investors to approach the subject with state of the art risk-management. Abstracting the risks associated with the inherent nature of Bitcoin (e.g. volatility) does a great deal in bringing cryptocurrencies closer to traditional investors.

This is also reflected in a higher volume of transactions by these institutional players, as it is possible to observe with our indicator below. Once again, aside from a spike recorded in 2019, the Transactions Volume in the network has been growing steadily. 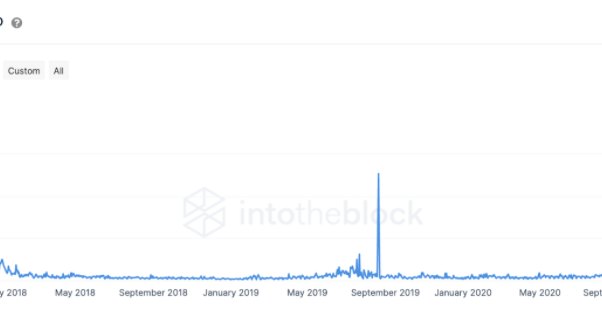 In April 2020 there were on average 500 transactions greater than $100k, while just after a year there were over 8.5k transactions. Only during the last 7 days, more than $131billion was moved on the Ethereum blockchain.

The entry of institutional investors means that now “institutional-grade” crypto such as Bitcoin and Ethereum have more established price bottoms, highlighted by institutional buys. It will be highly unlikely for these crypto to retrace below that. At the same time, the increased legitimization and the increasing institutional buys will likely boost them in terms of price and recognition as a new asset class.

The recent growth has pushed many to compare it with the previous bull run of 2017. However, crypto has evolved significantly since then. This is mainly because several applications are now running and fully functioning. As such, users can finally experience the true value brought about by decentralized finance and other applications. Smart contact platforms are thriving and growing in terms of addresses and amount transacted. In turn, this brings increased attention and legitimization by institutional investors, who are slowly pouring their funds into crypto. In a virtuous cycle, this accelerates, bringing in new capital and at the same time making cryptocurrencies less volatile and more appealing to investors.

The use of on-chain analytics provides insights into aggregated figures not limited to network growth and usage, and institutional interest and activity. This article deliberately decided to restrict its scope to these aspects, but it is important to mention that given the magnitude and novelty of the phenomena, there are several other aspects, including systemic and macroeconomic ones that are worth exploring for future endeavors.

We are a data science company applying cutting-edge research in AI to deliver actionable intelligence for the crypto market.