Bitcoin and remittance, where are we?

The remittance market has, in the past years, attracted a large number of bitcoin start-ups. Huge in size, involving more or less every country in the world and with some very large and established incumbent player charging high fees, it looked ripe to be disrupted by the promise of a decentralised, almost free and instantaneous way to move funds across borders and currencies.

The remittance market has, in the past years, attracted a large number of bitcoin start-ups. Huge in size, involving more or less every country in the world and with some very large and established incumbent player charging high fees, it looked ripe to be disrupted by the promise of a decentralised, almost free and instantaneous way to move funds across borders and currencies.

After some years little seems to have happened in term of market disruption; it is just a question of more time needed or should we conclude that cross-border remittances are in fact not the bitcoin’s killer app we expected to be?

Official worldwide remittances amount to almost USD 500 billion, the true size, including unrecorded remittances is believed to be significantly larger. Even not considering the undocumented remittances, this is more than three times the total level of international aids.

The relevance for developing economies is such that the World Bank, since 2009, created the Global Remittance Working Group, to coordinate the work on remittances at International level. The goal to reduce to less than 3% the transaction costs of migrant remittances and eliminate remittance corridors with costs higher than 5% has been included in the Sustainable Development Goals. 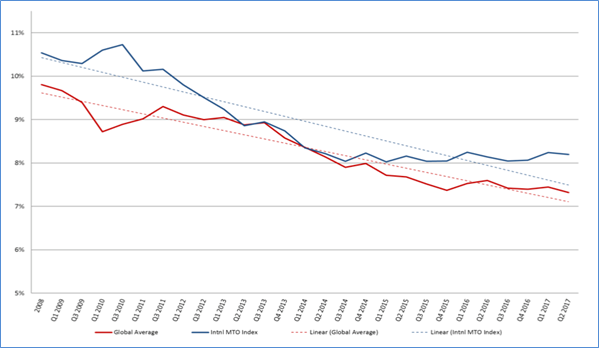 Taking into account the relative size of the flow in each remittance corridor the global weighted average is 5.57%, showing as the biggest corridors are relatively cheaper. 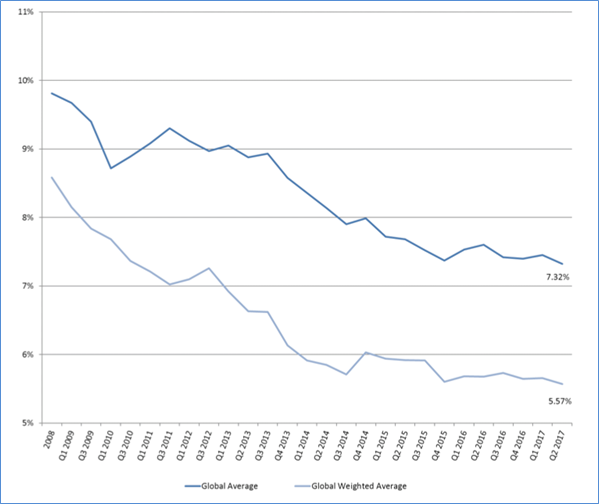 Significant disparities exist in cost levels across countries, migration/remittance corridors and channels. The cheapest corridor is Saudi Arabia to Nepal with an average cost of 0.6% and the most expensive Australia to Vanuatu with 20.7%. The situation of the ten largest remittance corridors (Table 1) shows costs varying by origin, destination and bridge currency. 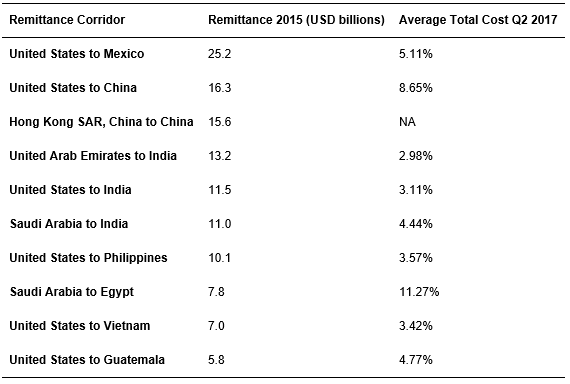 Finally, another major source of costs variation is the category of the remittance service provider (RSP). Costs associated with different channels can vary as much as 300% (Figure 4).

Bitcoin startups entered the remittance arena with the promise of friction free, extremely low fees, almost instantaneous payments, for any kind of customer all over the world.

The case seems perfect: a huge global market where, often not well off, people that spend USD 37.5 billion per year in fees to send money back home to relatives, can dramatically reduce this financial burden using bitcoin for their transfers. In spite of that, after some years, incumbents (i.e. Western Union, MoneyGram, Ria) are still dominating the market and the average fees are more or less unchanged.

What is stopping bitcoin-based remittance startups from eroding market share from the existing top players in the market?

Bitcoin remains a great solution for instant transactions settlement but, if we look at the whole remittance process, we can quickly realise that this is just a part. In a cash-to-cash generic example (Table 2), both traditional and bitcoin-based remittances share the part of the process involving the physical handling of fiat currency and its associated costs.

The fees that have to be paid to the sending kiosk and to the pawnshops’ network are the same in both cases. According to Luis Buenaventura, bitcoin remittance specialist & fintech entrepreneur, for Canada, Hong Kong and Singapore corridors to the Philippines, these costs can amount to a USD 3-5 flat fee at the sending kiosk, 1-1.5% FX spread and 6-7% fee at the pawnshops network inside the Philippines.

For the most important remittance corridors, large traditional MTOs (Money Transfer Operators), but also companies as Transferwise, don’t need to actually move funds. Utilising cash reserves held both in the sending and in the receiving countries they can pay the remitted amount just adjusting their balances in each territory. In this way the transfer can happen in a fraction of the time required using traditional banking channels and can be even cheaper than using bitcoin-based solutions.

Compliance costs are an important part of the costs shared by all market players. In addition, bitcoin regulations are, in most of the countries, not at pace with the technology and this represents an additional disadvantage in comparison to more traditional service providers.

There is a significant competition from innovators not using bitcoin. A large number of startups, leveraging digital and mobile technologies, offer to their clients a substantial reduction in fees, increased transparency and reduced transfer time.

If we want to name some of them (no particular order): Xoom, WorldRemit, Remitly, M-PESA as well as WU.com, the digital remittance service of the market leader Western Union.

It is worth to note that often, not looking under the hood, the client experience offered by a digital or mobile remittance platform is indistinguishable from the corresponding one offered by a bitcoin based remittance operator.

The corridors involving exotic currencies are often burdened by the highest fees and therefore the ones in which a bitcoin-based settlement could provide substantial cost reduction.

Unfortunately, these are the same corridors in which lack of counterparts willing to exchange local fiat currency for bitcoin creates liquidity issues.

In spite of the convenience, just 2% of global remittances are made through mobile services, making evident the existence of several barriers that have to be tackled in order to reach a significant adoption of tech-based solutions. These barriers can be caused by lack of finance, lack of infrastructure, lack of training, or simply by a lack of trust for a system that differs from the one used habitually.

Is bitcoin’s potential in the remittance market still there?

The debate is far from a consensus and opinions are diverse.

At the end of last year, MoneyGram’s Peter Ohser dismissed bitcoin as not right for cross-border money transfers and only a few months later MoneyGram has been acquired by Ant Financial (Alibaba payments’ arm) whose CEO, Eric Jing, acknowledged their interest in blockchain technology. A true fintech nemesis!

Bitcoin has the big advantage to reduce the capital cost for new entrants, thanks to the real-time settlement, cash reserves at the extremities of a remittance corridor become superfluous.

Bitcoin makes a lot of sense in all situations in which holding value is a concern (wherever there are uncertain political situations and currency volatility) and offers to the unbanked population a cheap way to control and move their finances. Control over data, security and the absence of central entity are a value for every concerned user.

Unfortunately, recent evolutions in bitcoin do not bode well for the future of this cryptocurrency as a way to transfer small amounts of money and for its capacity to continue to innovate.

I am an energy market veteran. I have been dealing with energy from a lot of different angles: engineering, marketing, investment, cleantech and trading. I am amazed by the potential of blockchain technology in creating new, more open, fair and transparent market architectures and I am now exploring its potential in the energy ecosystem.